Of Dice and Glen Episode 5: Surprises

Filled with renewed determination, she quickly stowed the ineffectual dagger and flattened her hand, somehow managing to make the simple gesture threatening. Goblin-searing flames sprang to life and she hurled the handful of fire straight at the ugly face.

The goblin’s expression contorted in fear as it watched the molten ball of death hurtle toward it. As if in universal response to Shaddar’s earlier comment about interior incineration, it sucked in a breath to scream just as the fire met its face. There was a deeply unpleasant sound like a cross between sizzling flesh and a death choke.

Then there was only a tiefling and a dragonborn standing in the forest.

Snarling back the pain, Shaddar gave a grateful nod to Luna. Sheathing his swords, the white dragonborn retrieved the rope hanging on his backpack. Fastening a lasso, he draped the loop over the hole in the ground which, on closer inspection, went into some underground stone structure. There were some hinges in the stonework that was all that remained of a trapdoor. 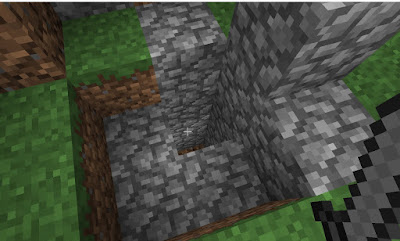 “In case the kobold heard,” he rasped by way of explanation, ignoring the freely flowing blood from the wound inflicted by the goblin.

“C’mere, yah great scaly martyr,” Luna said and reached for the wound in the dragonborn’s ribs, that, on closer inspection, was littered with flecks of rust.

Eyeing him narrowly, she spread her feet wide, bracing herself with a stiffened tail, balled both hands into fists and opened her sharply-fanged mouth as wide as it would go. Gesturing pointedly, she slowly filled her lungs with air, then nodded to his wound, black eyes steely and unyielding.

Shaddar raised a scaly eyeridge, not concerned in the least about Luna’s threatening stance. He was amused more than anything, and a little touched by her concern.

“Fine,” he said, deciding to humor her. “You can take care of the scratch as long as you don’t make noise.”

The scratch, she mouthed, mockingly, but moved forward and gently laid her hand on his injury. Speaking as quietly as she could, the tiefling cast her healing spell. Soft, white light glowed from her palm, spreading to encompass the entire slash in the golden-white covered flesh. The scales that made up the dragonborn’s natural armour shivered, moved and reshuffled themselves to seal the wound.

“That’s a neat trick,” Shaddar said, examining his shoulder in surprise. “You gotta teach me that some day.”

He smiled up at Luna. “Thanks.”

The rope hanging into the hole quivered and shook.

“Neat trick?!” she whispered harshly, stopping abruptly as the rope began to boogie.

The kobold’s lizard-like head popped out of the hole and the creature froze when it saw the two strangers standing there.

Shaddar quickly tightened his lasso around the kobold, covered its mouth with one hand and hauled the creature out of the hole.

As the creature came out of the hole, its bucket of dirt fell from its hand, landing beside just shy of Shaddar’s foot.

“You any good with knots?” the dragonborn asked Luna.

The tiefling took the rope in both hands and began coiling it around and around the clawed hands of their newest enemy.

“You are going to answer our questions,” Shaddar said to the kobold, keeping his hand clamped over its mouth. “If you lie or make any attempt to get help, you die. If you understand, nod.”

Shaddar slowly removed his hand, ready to clasp it over the kobold’s mouth again at a moment’s notice.

“What are you doing here?” he asked.

“Digs! We digs!” the kobold said, squinting in the sunlight that was so harsh to its eyes.

Nodding, impressed, Luna assumed an expression of permanent “yeah, what he said”.

“Goblins say so,” the kobold replied.

“I wonder if our friend here would be more helpful if I gnawed on one of his fingers,” put in the tiefling.

“What are they looking for?” Shaddar asked.

“Eh, too bony anyway...” Luna muttered, turning away in disgust, tail lashing low in the grass.

“Kobo?” a goblin voice called from the hole. “What take so long? Kobo?”

Shaddar slapped his hand over the kobold’s mouth before it could make a sound.

Luna froze, eyes flicking to the hole automatically. A devilish gleam came into her eyes and she crept over to the bucket of dirt the kobold had dropped.

“I-I... Coming! Had to make a pile!” she screeched, in imitation of their prisoner, casting an apologetic glance at Shaddar as her voice failed entirely.

There was a pause and from the top of the hole they could almost hear the effort of the goblin thinking.

“You sound strange… Gritgut? Hardtoe? Yous fooling me? Not funny. Da boss get mad if work slow. Send kobo back!”

In response, Luna shook the bucket and allowed dirt to sift back down the hole.

“You right, he coming,” Shaddar said in goblin, nodding his approval to Luna.

There was another pregnant pause, then the rope started shaking again.

Standing back a half pace, Luna switched out her scimitar and dagger for her druid’s staff. She grasped it tightly, crouching slightly, black eyes fixed on the hole with malevolent glee.

Soon, the goblin’s head poked out of the hole, a suspicious snarl on its ugly face.

Grinning, Luna swung at the ugly head with all her might. There was a splintering crack as the staff squashed one of the goblin’s ears into the side of its head.

The head flicked sideways suddenly and the goblin howled in agony. Even as its world spun, the shocked creature tried desperately to cling to the rope, but its hands were too tingly for it to keep its hold. With a desperate scream, it fell back into the hole. It struck bottom with a thud and was silenced.

For answer, Luna dropped the bucket down the hole and waited.

There was a squelchy, muffled thud. Then silence.

“Yep!” she grinned at her companion.

“Well done,” Shaddar said with an approving grin. He turned his attention back to the kobold, uncovering its mouth. “How many more are there?”

The kobold, trembling, squeezed its eyes shut. Its lips and fingers wiggled.

“Threes or tens?” it said uncertainly.

Normally, Luna wasn’t one for praise or accolades. It’s very difficult to get anything except a standing ovation from a tree, minus the ovation. However, the grin and words of approval struck her unawares and her triumphant grin faded to a quiet and slightly puzzled smile. Maybe this dragonborn was a creature to trust...

“Seventeenthrees of dem!” The kobold said desperately, shying away from the demon girl.

Shaddar sighed. “I don’t think it can count.”

“How many more?” Shaddar asked.

“Sure,” Luna said, comfortingly. “Here, let me get you some dried meat. You look a little hungry.”

Turning to her pack, she retrieved her scimitar and slashed it swiftly across the kobold’s throat.

The kobold’s eye’s flew open for a moment, then glazed over as its blood gushed out through the fatal wound.

“What? That’s all it was going to tell us and now we have one less enemy to fight. I even reassured it before it died. It might be evil but it never chose to be. It was way too stupid to choose anything.”

Shaddar’s gold eyes shifted from Luna to the tied kobold, still oozing blood. He had to admit, she had a point. He just had to look around at the slashed trees to know that setting this evil creature free was never really an option. Still, killing it while it was tied up, not even able to defend itself… it didn’t feel right.

It was already done, though. Nothing could be done to change that. He would simply have to keep a closer eye on Luna if they took any more prisoners.
Nodding morosely, he retrieved his rope from the dead kobold.

Discover what happens next in Episode 6: Into the Darkness