Of Dice and Glen Episode 6: Into the Darkness


“We should search them to see if they have anything of value,” Shaddar said without looking up at Luna.

Watching him closely, she frowned and rolled her eyes. For a dragon, this warrior was a real soft-touch.

“It was just a kobold,” was all she said.

Turning to the business at hand, she helped her companion search the bodies, without really noticing the gore involved.

“Loki’s lace leotard... It’s just a bunch of money!” she said, with disgust.

Dropping the coins she found in a small pile in the grass, Luna stood, hands on hips and shook her head in disappointment.

“Next time we find trash to thrash that wears stuff on its feet. Ok?”

“Why?” Shaddar asked, walking over to the pile Luna had made and splitting it evenly into two piles. “What does that matter?”

“None of your business,” she replied, without malice.

Shrugging and shaking his head, Shaddar put his half of the coins in his pouch and pushed the other half over to Luna.

“What?” she said, eyeing the money with disinterest.

“Ahr,” was her only response as she knelt by the hole in the ground and reached for the rope. Grasping it, she almost slipped forward into the opening with a small, startled squeak. “Obviously sometime in the past I deeply offended the god of climbing...”

Frowning, Shaddar wrapped Luna’s share of the treasure in a scrap of cloth and stashed it in his pouch. He came over to her side and looked down into the hole. Seeing how dark it was down below, he took out a torch and set about lighting it.

“It’ll be easier if you take it slower,” Shaddar suggested.

Clicking her tongue impatiently, Luna leaned over and swiftly lit the torch with a puff of flame from her hand.

Grudgingly taking his advice, she slowly reached again for the rope. This time, she gained a firm grip on it and lowered herself into the hole.

Shaddar followed her down, waving his torch around to see if there were any more enemies around.

They were in a large circular room, filled with piles of dirt most of which looked like they’d been dug around other than piled. The stone floor and walls were in quite a state of disrepair. Nothing living was in sight.

“What kind of place is this?” Shaddar asked, frowning.

“A wererat nest,” she replied dismissively, pressing forward. “Come on!”

“I meant, why is there a stone building underground,” the white dragonborn clarified. He gave a quick search of the dead goblin and was surprised to find it actually carrying platinum coins. He pocketed them, splitting the money between himself and his stash for Luna.

“Tower,” she grunted, scampering around the round underground room. “Used to be up there, now it’s down here. That’s strange...”

Turning, she frowned at him in confusion at the information she had gleaned.

“Must be ancient,” Shaddar said. “Looks like we’ll need to keep going to get rid of the rest of these monsters. Best keep quiet until we find something.”

“All seventeenthree of them?” she said, hushing herself nonetheless.

Shaddar allowed himself a quiet chuckle.

Glancing at his torch, something seemed to occur to the tiefling.

“You really need that thing?” she said, with undisguised skepticism. “It’s a flaming beacon for anything crawling around here that may want to munch on our tails. Oh, sorry, my tail.”

“It’s too dark to see without it,” Shadar said, frowning.

Luna stared at him with a puzzled expression and reached up a hand to scratch absently at a horn in confusion.

“Are you saying you can see in the dark?”

“Not at all,” Shaddar said. “You’re right about the torch, though. Perhaps you should scout ahead - but don’t get into any fights on your own!”

Setting aside the startling discovery that dragons are blind, Luna pouted at her friend.

“What if a goblin charges at me and impales itself on my scimitar?”

“Then you run back to me before any of its friends hear its screams,” Shaddar said dryly.

“Fiiiiiiiine,” she agreed, reluctantly and turned to circle the room, keen black eyes unimpeded for ten feet around her.

Coming to a crude staircase set into the floor, she beckoned to Shaddar silently, then rolling her eyes at herself, crept back to him and whispered.

“There’s a set of steps going down. Over there.”

Shaddar followed her over to them. “I’ll wait at the top in case you need me.”

He drew one of his swords, holding his torch behind his back so the minimal amount of light could get down the stairwell.

The stone steps had once had a railing, but they had long since rotted away.

Moving with extreme caution and stealth, Luna crept toward, then down the stairs.

She found herself in a room as decrepit as the one above. There was a rotted dresser, a filthy mirror hanging at an angle on the wall, and a half-collapsed, dirt-covered mouldering bed. There were two doorways - an empty one to the right and one to the left with a rotted door hanging from the frame - and from both of them came scraping and chipping sounds. 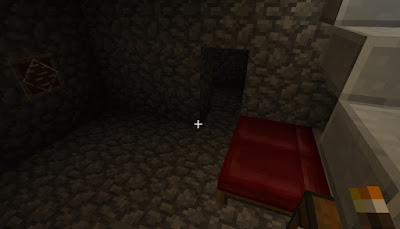 The tiefling’s head popped back up the stairs.

“Two doorways,” she said in a hoarse whisper. “We should both go with one.”

“Did you see anymore goblins or kobolds?” Shaddar asked.

Without waiting for his response, she moved back down the stairs and considered her choice of weapon. The fire would be best for surprise but it would emit light. Her second choice was her deadly staff, which she brought up diagonally across her body.

Moving surprisingly quietly, Shaddar followed the tiefling down the stairs.

Signalling for the dragonborn to take the doorway with the rotting, smelly excuse for a door hanging in it, Luna herself moved toward the more open opening.

Holding the torch so it would shed the barest amount of light through the door, Shaddar peeked around the corner.

He could see a kobold through the opening, hacking away at a pile of dirt and rubble that appeared to have poured in through an opening in the tower wall.

Shaddar charged at the kobold, swinging with both sword and torch.

The kobold went down with a yelp.

Two small horns preceded the purple-haired head through the doorway, and Luna saw a similarly employed kobold. Creeping up close behind it, she swung her staff for its head. Just as she made her attack, the creature bent its head to examine something it had unearthed in the dirt. The staff whistled harmlessly through the air, by mere centimeters. She hissed in a breath of rage.
“Son of a half-orc!” she screeched at the kobold.

Hearing the cry, Shaddar spun from the dead kobold and ran to the other doorway just in time to see the second kobold spin around. Luna seized the opportunity and brought the staff whipping down on its head. There was another sickening crack as the length of wood shattered the reptilian skull. The monster’s half-formed cry of “Demons!” was cut off as it gurgled to the floor, where it lay still.

This time the tiefling had the presence of mind to not shout, though she would have preferred to hoot with glee and maybe do a small victory dance over the corpse.

The dragonborn wouldn’t approve, she thought to herself as she turned back to her companion.

“Where now?” she said in a low voice, no longer a whisper. “Split up again?” She was beginning to like having this second warrior by her side. Together they were taking down foes she would be loathed to admit she ran from, merely out of a grudging sense of self-preservation.

She had been alone for a good bit of her life and generally did not trust others. She still wasn’t sure if she trusted this one, nor if she wanted him around, but in battle, he sure was handy.

Shaddar shook his head. “Not unless we need to.”

Across the bedroom, behind Shaddar, a drooling goblin stepped into the doorway with the rotted door.


Discover what happens next in Episode 7: Treasure!