Colleen has started calling me Wile E. Coyote whenever talking about our rat problem. I must admit that the idea of painting a fake tunnel to trick the rat is becoming quite appealing.

In the ongoing saga of our attempts to get rid of Donald, the rat living in our house, we last left off with Donald regularly eating poison hidden in peanut butter on crackers in our closet. When that failed to get rid of him, we switched poisons. A week later, going on the hunch that we might not be getting a high enough dose of poison into the rat, we crushed the poison pellets, mixed them with the peanut butter, and put that in the closet on a plastic lid.

Donald has been steadily eating it for a week, but he should have been dead by now if he was getting a lethal dose. So, in an attempt to gain a better understanding of our enemy (and in connection to a vague scheme involving dropping a bucket over Donald while he’s eating from his dedicated food source), I set up a camera in the closet.

We now have video footage of our unwelcome guest – he showed up around 11:00 last night, after everyone had gone to bed. Here’s what he looks like: 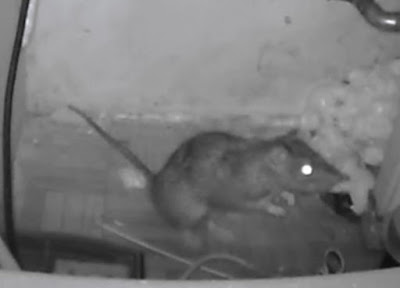 It’s hard to tell in the picture, but he’s about 10 inches long, not including his tail, and 4-5 inches tall. Until now, we had been assuming (well, hoping) that Donald was a somewhat smaller rat, when it turns out he’s actually as big as Templeton (who I actually saw in person). In fact, there’s a good chance he’s the same rat a Templeton, which heightens our suspicions that he is immune to poison. Either that, or he’s somehow smart enough to know how much to eat to avoid a lethal dosage.

What’s next? Well, we’ll likely try a new type of poison. Failing that, I just might have to go through with my ridiculous bucket plan. Or, better yet, I could hang an anvil in the top of the closet and, when he shows up, drop it on his head! Yeah, that should work....

Also, make sure you check out my wife's blog and her website.