Of Dice and Glen Episode 11: Furry Friends and Giggling Trees


Just as Shaddar was depositing the final corpse into the hole, Luna charged back into the clearing, scampering on all fours, followed by two moles and a groundhog. The rodents blinked in the sun and stayed close to the tiefling.

“Very well troops,” she addressed them. “You know what to do.”

Turning to her dragonborn companion she stood up and grinned.

“Problem solved,” she said, with a touch of smugness. “They’ll bury this without a trace.”

Shaddar stared from Luna to the animals, his jaw hanging open.

“What?” she asked, her eyes shifting from the small animals already beginning their task to Shaddar and back. “Not fast enough? I don't think I could call any more," she mused, watching her furry friends thoughtfully."

“If you’re sure they can get the job done…” Shaddar said hesitantly. It wasn’t the skills of the animals that he doubted, but their attention span.

“They’ll get it done!” she snapped, rounding on him. “Just because you’re prejudiced against mammals doesn’t mean my friends can’t do what I ask them!”

Her unnervingly black eyes narrowed and her long tail twitched in the grass. She stared at him defiantly, daring him to doubt more.

“I’m have nothing against mammals,” Shaddar said, flicking his forked tongue at her. “They just smell funny.”

The tiefling poked her own small, pink tongue out from between her fangs, in imitation of her reptilian friend. A playful gleam was back in her eyes.

“Says the girl with the horns and the tail,” Shaddar said with a snap of his jaws.

The moles and the groundhog looked at each other uncertainly and began to back away.

“Says the dragon-man without a tail!” she returned and burst into a fit of giggles, the tail in question twirling into coils of delight.

Laughing, Shaddar shook his head. “Come along, imp. Get your friends to work and let’s be on our way.”

"Right!" She said, still grinning and turned to the rodent contingent. "Aaaaaaaaaaand... DIG!"

The groundhog jumped into action with gusto, while his mole companions blinked owlishly up at their trifling commander.

"You heard me, yah furry turncoats! Dig like your claws depend on it!" She fixed them with a baleful eye.

Giving the mole equivalent of a shrug, the pair slowly imitated the groundhog. All three soon vanished in a pile of earth.

“I’d forgotten about that until you mentioned it!” Luna whined. She readily began the journey, however, starting off at a slow pace to allow the more experienced traveler to lead the way.

Their journey through the woods was much quicker this time, since they were no longer tracking monsters. Shaddar led the way unerringly and within a few hours they were within sight of the large oak that marked the edge of Luna’s territory. 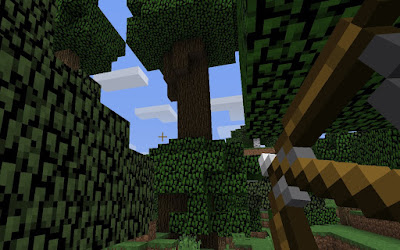 While scanning the area, Shaddar misstepped and plunged face-first into a tree, falling to the ground.

Upon greeting this final familiar sight, Luna scrambled up into a low branch of another nearby oak. She had an excellent view of her companion's tumble and suppressed a giggle behind one grubby hand.

"Are you all right, dragonborn?" She called. Something was nagging at her, however.

She thought she could hear a stifled giggle from the large oak, but it was so quiet she couldn’t be sure. A branch stretched out in front of her, offering her a convenient way to lean forward for a better look.

“I’m fine,” Shaddar muttered, climbing back to his feet, but he didn’t look up from the ground.

Reaching for the convenient branch, Luna propelled herself forward, planning on swinging down, leaning on the limb. Instead, her outstretched hands passed directly through the wood that was now revealed as nothing more than an illusion. She crashed out of the tree, falling on her face with a pain-filled grunt.

“Two-faced, half-wit spawn of a polar-worm...!” She gasped, when she regained her breath.

Shaddar rushed to her side to help her up. “What happened?”

This time, the giggler from the large oak was less successful in stifling their amusement.

“This tree is an imposter!” she yelled, pointing. “And I wanna find out who’s making us look like fools!”

The white dragonborn frowned at the tree. “An imposter?”

The tiefing reached out angrily to demonstrate the nature of the mirage branch, then whirled, clawing at thin air, as she felt the startling touch.

“MRRRRAAAAARGLE!!!!!” she snarled, staring around for something to bludgeon to death.

“What!? What!?” Shaddar nocked an arrow in his bow, searching around frantically.

Another giggle from the large oak and suddenly there were four orbs of light surrounding the pair.

“Something pulled my beautiful tail!” she whimpered, clutching up the slender length and staring daggers around at the tree. “What in the name of all that’s holy is going on?!”

Bending down, the tiefling grabbed at a stone lying on the ground. She hurled the stone toward the giggling tree, with considerable force.

The stone slammed into the tree, bounced off it, coming straight back. With a resounding ping, it ricocheted off Shaddar’s scalemail, flew up into the foliage where it clunked around several branches before careening down to hit a rock, bouncing back up to ricochet off another tree and flying off behind the big oak. There was a soft thud and yelp as it hit something, then a cat-sized red dragon with butterfly wings fell to the ground as if propelled from a branch. The orbs of light vanished.

The white dragonborn stared from his armour to the tiefling to the little dragon.

“...yes!” Luna declared, after a moment, a look of triumphant astonishment appearing on her face.

Shaddar smiled and shook his head, not believing her for a minute.

Scurrying over to the fallen mini dragon, the tiefling reached out a hand to grasp the tiny neck.

The small dragon nimbly dodged out of the way, taking to the air. As it fled into the woods, it chittered away in draconic and giggled incessantly.

“Troll toenails!” Luna snarled, her hand closing tightly around thin air. Turning to her friend, she cocked her head, curiously. “What? You understood that tiny terror?”

“Of course,” Shaddar said, “although, I’ll not repeat it. There’s a critter that could do with a mouthful of flame. It did say something about getting you good this time, though.” He raised a questioning eye-ridge. “This time?”

“This time...” Luna repeated, slowly, then glanced at her companion. “Oh uh... This time. Yes. I might have met that troll-face before...”

“Might?” the dragonborn asked. “We have a long journey still, you may as well fill the time with your tale.”

As they marched along, the tiefling sketched out a low-key rivalry between her and the tiny flying reptile. She told the dragonborn in no uncertain terms how she had defeated the adversary every time, but it wasn’t hard for him to see through this as the bravado of a bruised ego.

“And now I run off while that gargoyle’s toe-sand scampers around my forest! And I have to talk to people, too!” She finished in a huff, her long tail slashing the underbrush.

“Well, look on the bright side,” Shaddar said, holding back his laughter at the childish prank war. “When you return, you’ll have me to help chase it off.”

The minor nuisance dealt with, they continued on their way.


Discover what happens next in Episode 12: A... Welcoming Village

Also, make sure you check out my wife's blog and her life coaching website.