“Something’s in trouble!” Luna whispered, gaze never leaving the stairway, tail lashing silently behind her. As ready as she was to kill evil, she could not abide senseless suffering, even though it was more than likely evil itself suffering.

Shaddar nodded. “You lead the way, under cover of darkness.” He placed his torch on the ground by his feet, ready to kick it down the stairs, and drew out his bow, nocking an arrow. He wanted to be sure he could hit a target before losing the element of surprise.

Nodding vigorously, and thinking privately that if they were going to be doing much more hunting together that a signal system might be a good idea, Luna took a deep, quiet, breath and crept down the stairs.

The room was big and round, lined with crumbling and rotting bookcases. In the centre of the room was a large stone table covered with arcane markings and around the room were other workbenches, cauldrons and mysterious alchemical instruments in various states of disrepair. By another downwards stairway, filled with dirt, a kobold was digging away. Nearby was a big, nasty goblin with a whip who lashed out every time the kobold wasn’t moving fast enough - or whenever it felt like it. 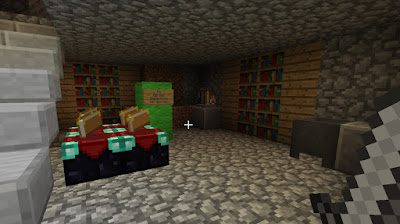 Luna immediatelysaw the conflict and despite the target of the whip being a wretched kobold, the tiefling winced in sympathy. She glanced up Shaddar pointed down, in front of herself, then made motions as of an obscenely fat and grotesque creature whipping, then chuckling heartily.

Not understanding Luna’s odd dance, Shaddar thought she was playing another one of her games. Snapping his jaws impatiently, he nodded his head to tell her to get on with it.

Snorting in frustration, she opened one hand to reveal a ball of flames. In her irritation at her dragonborn, she threw the flaming missile off-balanced and it sailed harmlessly past the ugly head of the large goblin.

“Motherless son of Frost Giant!” she swore loudly, there no longer being any point to her stealthy movements.

The boss goblin has just been raising its whip again when it dimly noticed the fire shoot past it.

“Fire?” it rasped, in dull confusion. “Fire!” Turning, it searched for the source and spotted Luna. “Fire demon!”

Shaddar charged down the stairs, kicking the torch ahead of him to light the room, as soon as he saw Luna’s fire. He was still on the lower stairs when he released the arrow at the goblin.

The projectile flew true, lodginging itself in the goblin’s shoulder just as it finished speaking. It yowled in rage.

“Turn on your master, in the name of Kurtulmak!” Shaddar shouted in the draconic language, believing the kobold to be the only other one who would understand him.

Hearing the name of its demigod spoken in the sacred tongue, the kobold turned to face its master’s back, an evil gleam in its eye.

Switching his bow for his swords, the white dragonborn continued to charge right up to the goblin, slashing with both weapons. While the second hit barely nicked the goblin, the first one slashed a deep gash through its chainmail.

Not one to be left out of the fun entirely, Luna readied another fireball.

“Mielikki,” she whispered. “Please let this one fly straight.”

The ball flew from her hand and struck the heavily-armoured shoulder of the goblin, sizzling uselessly until it expired. The tiefling cast about for a curse at her second failure of the battle and gulped down a burning in her throat. Her completely black eyes began to swim in moisture.

Snarling viciously, the big goblin took a step back, lashing at the dragonborn twice with its whip, leaving two deep gashes.

The cracking of the whip served to be too vivid a reminder for the kobold and it couldn’t work up the nerve to attack its master. And, a scary as the fire demon was, she seemed harmless next to the towering dragonborn. So it jumped up on a table to swipe at Luna’s legs with its dagger, but in its nervousness failed to land the blow.

Trying not to show how badly he was wounded, Shaddar pressed forward, swinging his swords at the goblin again. Both blades just glanced off the goblin’s armour - he didn’t have the strength left to do any damage.

She looked quickly from one foe to the other. Her first instinct was to engulf the evil goblin in flames for hurting her friend, but she couldn’t quite get a clean shot from around his bulk.

The swipe of the kobold’s dagger solidified her choice. Her third fireball struck the unfortunate kobold square in the face.

The kobold opened its mouth to scream, inhaled the flames and was dead before it collapsed on the table, looking like some sort of grotesque sacrifice.

With a roar of glee, the goblin lashed at Shaddar with its whip again, leaving a slash across his face.

The pain and the wounds were too much for Shaddar. He fell to the floor.

With a whoop of glee, the goblin leaped its fallen foe and moved toward the base of the stairs to face the tiefling.

Luna faced off with the goblin and sought desperately for another spell that might help more. Holding both hands out in front of her, she spoke the words of the incantation and unleashed a shockwave. A monstrous thunder boom echoed deafeningly about the small antechamber and knocked the goblinoid backwards ten feet.

The goblin hadn’t a second to brace itself before the wave of energy hit it. There was an odd rattling sound that may have come from teeth or ribs. Flying back ten feet from the sheer force of the impact, the goblin landed against a rotting bookcase with a crunching splat. It was dead before it slid, squelching, to the floor with sawdust fluttering down around it.

The tears had dried on the tiefling’s face and she stood panting with the effort of her spell-casting. Then her attention slowly came back to the present and the prone form of her dragonborn friend lying bleeding on the floor near her feet.

“Shaddar!” she groaned and stepped quickly to his side, tail lashing the floor in tiny half-circles of terror.

Without ceremony, she fell to her knees and she prodded him ineffectually for a moment. Then she tugged his new shiny maille shirt higher up on his broad chest and attempting to listen for a heartbeat. There was one, distinct but slow, undoubtedly because of the pool of blood now staining her clothing and boots, Luna thought to herself.

“Alive,” she muttered to herself.

Holding her hands out automatically to cast her healing spell, she screwed up her concentration. Nothing happened.

Magic cost her energy and she would not regain enough to do anything more than simple gimmicks until she’d had a long sleep. Even talking to animals was beyond her now.

“Ok, ok, no magic. What then? Think! You stupid, filthy, mangy, ignorant half-breed...”

Insults people had thrown at her in rare moments of contact with civilized places sprang quickly to her tongue as she fought her own rising panic. She’d had few friends before, though she knew in her heart that every plant, rock and good animal living in the world was her friend. Rarely had anyone who could speak Common deigned to spend more time with her than it took to aim an unkind word or a blow.

“Find the wounds. Stop the blood. Cushion the head,” she remembered, slowly, some taught by a friend long ago, some just common sense picked up by the necessity of living far from any aid.

Beginning her work, she methodically went over his entire scaly body, doing what she could and cursing over what would simply take time.

Vaguely noticing these improvements, Luna continued to work past efficacy. Finally, when she could no longer find even the tiniest thing to do, she sat back on her haunches and truly appreciated the improvement in his condition.


Discover what happens next in Episode 9: Deathwatch